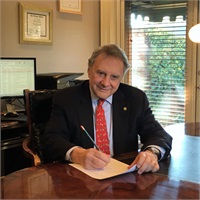 HARRY L. RUSSELL (Jack) is the founding partner and Chief Executive Officer of our firm. He began his career in 1968 as a stockbroker with Almstedt Brothers, subsequently joining JJB Hilliard, WL Lyons in 1969. He later became a principal and branch manager of Dean Witter Reynolds, which under his management grew to become a major factor in the investment business in Kentucky.

In 1986, Jack was recruited to open a new branch for J.C. Bradford & Co. in Lexington, KY. In 1991 he founded Russell Capital Management. In 1992 he developed Module Portfolio Construction (MPC) which is still an integral part of the investment management process of the firm. He is married to the former Carol Hammons Czirr, and has three grown children. Outside of business he enjoys working with new technology and travel. He majored in Business Administration at Transylvania University and is a graduate of the Wharton Business School Securities Institute and the Manchester Business School of the University of Manchester in the United Kingdom. He has served on boards as a financial advisor and has been called before the courts and the NASD as an expert witness in matters dealing with investments. Having served on several charitable boards in a financial advisory capacity, he currently manages the portfolios of many of our firm's foundation and endowment clients as well as our high net worth clients.