The FANG (Facebook, Amazon, Netflix and Google), a term coined by former hedge fund manager, Jim Cramer, of CNBC’s television show, “Mad Money”, make up four of the fastest-growing internet companies in today’s technology sector. They are market-leading companies symbolic of the meteoric rise in the internet age, routinely making headlines and almost certain to continue their growth in popularity for years to come. But they also represent one of the last-remaining underpinnings of a very weak 2015 stock market, as without them it would have been a negative year for the S&P 500. They might also be the key for a healthy stock market pullback. See their following three-year annualized returns:

This pace of growth is difficult to maintain … one can only go so far, so fast. A healthy correction cycle in shares of the FANG may be what this market needs for the seeds of future growth to be sown. So, don’t buy any“FANG”… at least not yet (until their cycle runs its course).

Here is the year in review for the major market indexes (with dividends), and an eye-opening equal weighted average return that truly illustrates the penalty placed on diversification in 2015:

Now we know why the Fed has been so hesitant to raise interest rates. Just look at the market’s reaction since Janet Yellen’s comments on Dec. 16th – down almost 9%. Despite it being a small 0.25% hike, the first move in nine years clearly was a big deal. And since the Fed’s Quantitative Easing program ended in October of 2014 the market is off nearly 5%. Yes, China is transitioning from a manufacturing to consumer based economy; and, yes, oil has brought America’s energy sector to its knees; and, yes, the strength of the dollar is squashing global growth and commodity producing countries; but, interest rates are still the main player in this market’s meager performance of late.

Looking at the charts there is relative support around the 1,865 level (S&P 500). This market value would take us back to the Ebola and initial oil crisis levels of October 2013 and 2014, and represents another 2% decline from today’s prices. Beyond that, there is stronger technical support around the 1,740 level which represents a retracement of roughly 50% of the advancement between 2012’s breakout and 2015’s highs. This would suggest another 8% downside potential. While short of a bear market decline of 20%, this would be a substantial 18% fall nonetheless.

Buffet’s 90/10 rule. Warren Buffett knows the historical return of the S&P 500 is 9–10% a year. We’ve actually experienced an average return of almost 16% the last four years (see the current market correction). But, according to his 2013 Berkshire Hathaway letter to shareholders, Mr. Buffett has instructed the trustee of his estate to manage his wife’s inheritance at a 90/10 mix of stocks/bonds. Even though Mrs. Buffett will inherit a sum sure to outlast any economic collapse, why would someone of Mr. Buffett’s acumen request this allocation? Well, a recent study of 30-year rolling returns dating back to 1900 (with an annual withdrawal of 4% — increased annually for inflation — and rebalanced once a year) showed a failure rate of only 2.3%. That is, over a 30-year period, the portfolio ran out of money only 23 out of 1,000 times … a failure rate most would be willing to accept considering the risks inherent in the market. But if that’s too aggressive for you, you’ll be pleased to know a 60/40 mix of stocks to bonds failed 0% of the time. And a stock mix lower than 60% actually increased the risk of failure (see below). 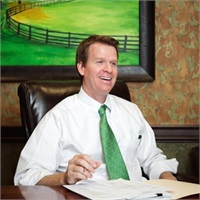